Toronto Niten Kai is a group dedicated to the study and teachings of Hyoho Niten Ichi Ryu Kenjutsu under Kajiya Soke. We are located in Toronto, Ontario, Canada. We currently have 15 members and train 3 days a week. 2 of our members Pavel Rankin and Barbara Csankova are currently living and training in Japan. Earlier this year we demonstrated at the Japanese Canadian Cultural Center. Here are a few images. 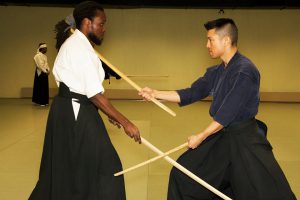 There are some old groups in Canada which we are not directly communicating now. In near future, we hope they will join us.

The group has grown more than we expected. New amazing people has started to do Keiko.

We have a new main dojo that we used during Kajiya Soke last visit to Chile. 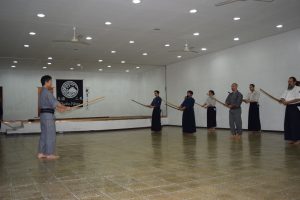 We still have a lot to learn and we keep training to perfect Tachi Techniques. 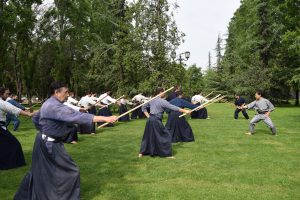 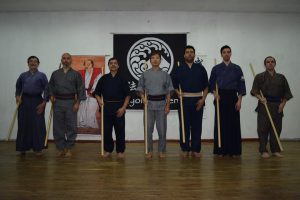 Off course we have fun times outside the dojo too, drinking good wine (the best in the world!!) and a lots of good talks. 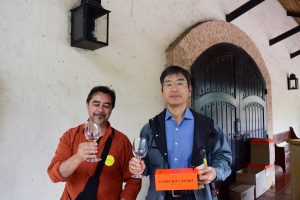 2017 awaits!! We have big projects for next year. Keiko in Japan, Keiko in Chile, hopefully new dojos and more!!!

We are Santiago Budokan the second group in Chile to follow the teachings of Kajiya sensei. It all started in 2015 when our sensei Nicolas Diaz (Kendo 5 dan – Iaido 5 dan) participated in the 2nd HNIR seminar that was held in Chile, organized by our colleagues from Katsujinken dojo. After that Diaz sensei showed a concrete interest in continuing the practice of kenjutsu, which led him to travel to Japan during 2016, where he could practice intensively with Kajiya sensei, during that time he could receive excellent lessons from the direct hand of soke , And much help from Maeda san. This year again our friends from Katsujinken dojo organized the 3rd HNIR seminar in Chile, where once again sensei Diaz was allowed to attend the seminar, and practice together with Kajiya sensei. After the event was over, we received the permission from Kajiya sensei to start officially practicing HNIR in our dojo. Currently we are a group of about 15 people members of our school in the practice of other martial arts like, kendo, iaido, buijnkan, aikido, etc. All show a lot of interest, and want to continue growing in the HNIR. At the moment we practice Saturdays from 13:00 a.m. to 2:30 p.m., and focus our practice mainly on the Tachi seiho of HNIR. Foreign visitors are always welcome! 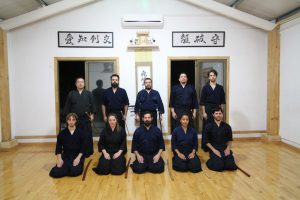 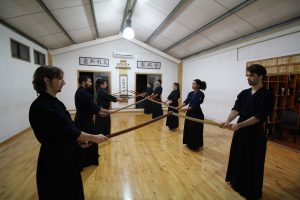 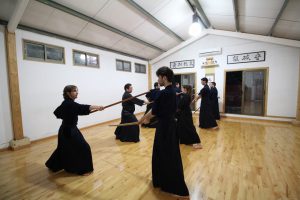 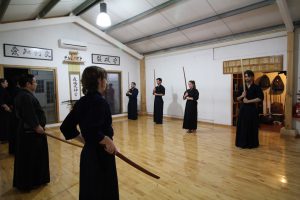 Throughout the year we continued cooperation with the Slovenian and Austrian clubs in joint training. Trainings were organized by Dani Vombek and were held in Žalec, Slovenia.

During the demonstration we were invited by Mario Šoštarič to participate as models in the competition photographer named Photo Re: Animator, organized by the Association V.U.K. from Varaždin. With goal being to motivate the city to give old abandoned building to groups which could use them for activities.

24. 11. We did a photo with Hrvoje Ivančić for his project The Way of the Samurai. We agreed to photoshoot after Hrvoje approached us with his idea. It’s still to early to have some good feedback on the results of the photoshoot since only a few photos were published at this time.

After the seminar in Lysice with approval from Croatian country leader Nikola and Takanori Kajiya’s Soke’s approval Vlatko starts Niten group in Zagreb. Group in Zagreb si the second group in Croatia 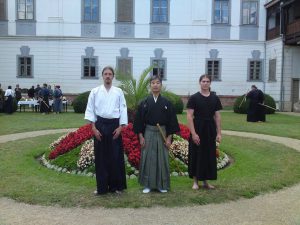 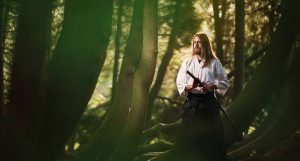 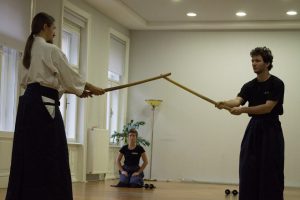 I have opened a training group this year, our name is “Society of Japanese swordmanship KIAI” and our website is www.kenjutsu.hr
We have held an initial 3 hour, free seminar to introduce kenjutsu to Zagreb where 40 people attended. After that a training group was formed – the one in the picture. 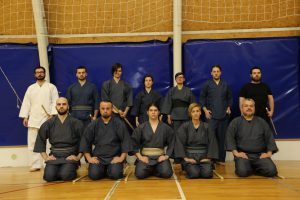 Our first training of the year 2016 was on Friday 8th of January at our usual training place in a local elementary school in Helsinki. To get a good start for the year, we began with vigorous and intensive 1,5 hours of kihon training. This got us into a proper spirit and focused on the coming year.

During the spring, we had training twice a week: one hour on Wednesdays and one and a half hours on Fridays. Kimmo Pohjoisaho was acting as the main instructor during both training times. Our spring season lasted until June. Since we are training at two local elementary schools that are not open during the summer, we usually train outside for few months during this time. We have a nice spot by the sea where we gather during nice and warm summer evenings, if the unpredictable Finnish climate allows. Of course, little bit of rain does not mind us at all.

In July, Kimmo Pohjoisaho and Raimo Nikkilä attended the annual European Hyoho Niten Ichi ryu seminar headed by soke Kajiya Takanori. This time it was held in a beautiful location in Czech Republic. As always, the seminar was very informative and both members of the Finnish delegation came back with plenty of new teachings from the soke.

In August we got back to our normal training rhythm when our regular practice places opened again for the autumn season. During the autumn we concentrated on practicing the new teachings that had come up during the summer seminar. There is always a lot of new things to learn after international seminars, that take a good amount of time to learn.

We had our last practice of the year on 8th of December. The schools where we practice close for Christmas break in early December and stay closed until early January, so we have around one month break at the end of the year.

For the French Hyoho Niten Ichi Ryu practitioners, the summer started this year the 4th of June with a great embu in Saint-Brice-Sous-Forêt, the city where Iwami soke and the masters of our ryu came from Japan to teach for the first time in our country, twelve years ago.

Leaded by Nguyen Thanh Thien sensei, in front of hundreds of visitors and practitioners of many other martial arts, the French students of Musashi’s kenjutsu could demonstrate the results of their efforts during a long year of hard work.

All the embu participants wanted to show their best, to honor their sensei and to honor the Japanese masters who transmitted them the art of Musashi. During three months, supplementary dedicated training sessions were also organized to prepare the embu.

When the so long awaited evening came, the concentration of every one was at the maximum. But after the practitioners entered the floor, a huge amount of energy coming from Musashi was liberated and was offered to the public.

At first, I want to say, that my primary effort is, to build up a few Keikojo across Germany. Besides, we have our weekly keiko every monday from 6 to 10 pm, and every tuesday form 6 to 8 pm. In addition to this, we’ve had several weekend-keiko in the summer, out in a park, which is near my home. Our first event in 2016 was on April 8th. There was a Kendo tournament in Bielefeld, about 400 km away from my hometown, and we were asked to do an Embu. It was a great success! One of the German Kendo-Sensei (Thorsten Mesenholl, 5th Dan Kendo) asked us after the Embu, to give a seminar in June for his Dojo in Wuppertal (also around 400 km form my Hometown). We were very happy to be invited! This was also a great success, and Mr. Mesenholl wants to continue Keiko with us. Through this, we even got new members from Osnabrueck and one from Wangen. They are very enthusiastic! The student from wangen travels once every two month around 400km ONE WAY, to have a weekend-keiko with us. The Student from Osnabrueck comes once a month for two days, only to attend keiko! I’m very very proud of them, and all of my students. We all are close together, because of Musashi. In July there was our highlight of the year, the workshop with Soke in Czech Republic. After that, we didn’t have a chance to do Embu or seminars, because of health problems in my family. I’m looking forward for 2017, to do even more keiko, get more members and having keiko with all of my friends from the different countries. And, of course, to visit the upcoming seminar with Soke. The photo was taken at our Embu in Bielefeld. 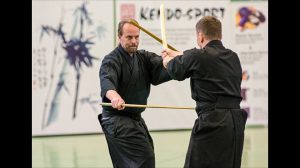 2016 has been a great year for Hyoho Niten Ichi ryu in Ireland with 2017 looking to be even better. Having had a rocky 2015, where the regular dojo classes had to close, we began teaching larger weekend seminar sessions each month at the start of the year, and received great feedback on the classes. This generated more interest and at present we have an astonishing 151 members who have registered interest in training. However, as we know many people express interest but those regular training students are the gold of the dojo. ;-D After country leader Batman O’Brien and senior student John Kennedy attended their third international seminar with Kajiya Soke, hosted by the beautiful castle in Lysice we returned with renewed vigour and gave a demonstration of Hyoho Niten Ichi ryu for Kendo na hErireann, the Irish body charged with overseeing the development of Iaido, Kendo and Jodo in Ireland. The members, comprised of experienced Kendoka and Iaidoka, greatly enjoyed the embu and it raised a number of questions in regards to the heiho of Nito kenjutsu which was wonderful. Shortly thereafter we were able to start once again holding regular classes, where we had 11 members attending our beginner’s course and have now 6 regular attendees training in Hyoho Niten Ichi ryu in Ireland. Hopefully we’ll be able to introduce some of these new members at the next international seminar and adding to the keiko family. All of us in Ireland wish our Hyoho Niten Ichi Ryu family a happy holidays and a wonderful new year, filled with friendship and great training and we greatly look forward to seeing our old friends and meeting new one’s at next year’s international seminar!

The italian Representative Lorenzo Ricci (on the left) and his student Alessio Repetto (on the right) with Kajiya Takanori Soke, in occasion of the Hyoho Niten Ichi Ryu’s Internationl Seminar of this year, which was held in Czech Republic.

In January Seibukan Club attended to the Kagami Birak ceremony that takes place in front of His Excellency the Ambassador of Japan in Romania. On this occasion we shown Kata from tradition Niten Ichi Ryu. In the rest of the year, Seibukan Club held public trainings 2 times per week.
Dragos Chiric (me) held two technical seminars in Bacau City for promoting Ken Jutsu.
Also it was seminar in Seibukan Dojo. Comparison between Japanese sword and european sword 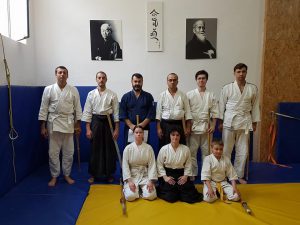 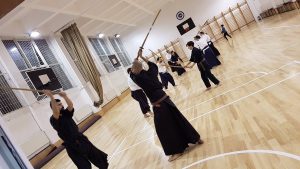 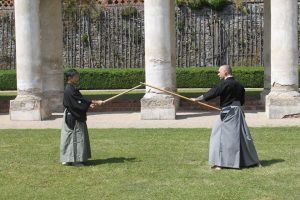 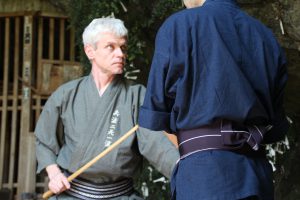 The Hyoho Niten Ichi-ryu UK Shibu is represented by five separate practise group dojo that practise on a weekly basis across the country.  The dojo are located in Newcastle, York, Walsall, Kent and Hampshire.  In 2016 the UK members met up every two months for our national keiko, hosted by each respective Dojo and under the guidance of the senior UK leaders, we practised Itto seiho, Kodachi seiho and Nito seiho.  These were typically followed by our social after keiko social drinks and dinners.   This year six of the UK practitioners attended the European keiko with Kajiya Takanori-soke in the Czech Republic.  Hyoho Niten Ichi-ryu was also represented at two embu at corporate events hosted by Honda and Panasonic.  We have seen a number of new members join our groups, ranging from complete beginners to those with some martial background.  The growing numbers and sense of comradery we experience locally and nationally is a testament to Hyoho Niten Ichi-ryu as well as the spirit of budo and we look forward to another year of training together 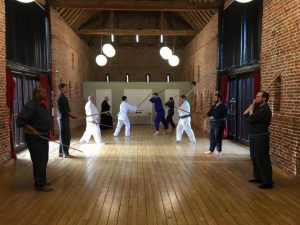 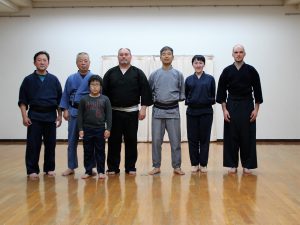 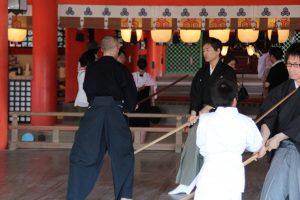 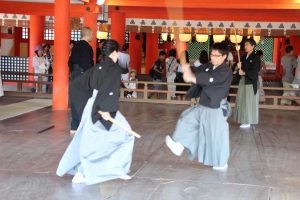